Hey, did you hear the makers of Vibram FiveFingers settled a class-action lawsuit to the tune of $3.75 million? You didn’t? That’s strange. It’s only been covered by every blog and news organization from NPR to Outside Magazine to The Wall Street Journal to The Christian Science Monitor to … um … The Omaha World Herald. Not to mention the dozens of time it was posted and re-posted in my Facebook news feed.

Some modest Googling informs me Runner’s World has the best summary of the actual lawsuit and resulting settlement.

What I find most striking is the celebratory, “I told you so!” tone in most of these articles (and ALL of the Facebook posts). It’s as though critics of those creepy shoes with the individual toes have busted Vibram deliberately trying to deceive its own customers with LIES and FALSE ADVERTISING. Some even posit the very logical argument that agreeing to settle a lawsuit while not agreeing to any wrongdoing means their products ACTUALLY WRECK YOUR FEET.

The best response I’ve read from the FiveFingers advocacy camp is similar to what is usually the best response in kerfuffles like these: There is no cut-and-dry, black-and-white answer, rather, this situation is choked with nuance, complexities at the individual user level, and a whole lot of unknown/unproven/non-definitive science. Justin over at Birthday Shoes has an excellent analysis of a lot of the subtleties in this story.

The most concise way I’ve found to phrase what I think is the correct thesis goes something like this: The health of your feet (and ankles, shins, knees, quads, hammies, glutes, back, neck, face, and hair) has less to do with the shoes on your feet and more to do with how you approach your exercise regimen, and, more specifically, how you transition to minimalist running.

Confession(s): I am a 200+ pound non-athlete, I’ve been running modestly for the past 2-3 years, I read Born To Run, and my running configuration definitely skews minimalist. I started running in Nike Frees, and then moved on to an assortment of New Balance Minimalist and Merrell Bare Access kicks. I also own a pair of Vibram FiveFingers. 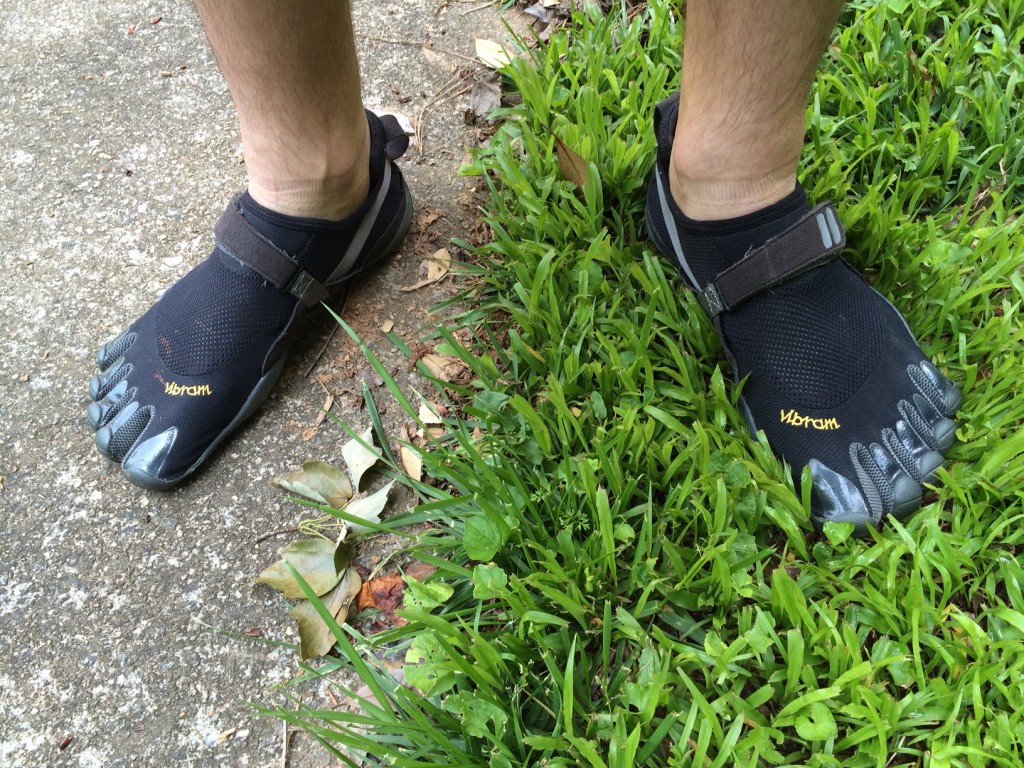 The author. In bare feet.

When I first started running, I enjoyed it, but with an ever-present sense of foreboding that injury was all but inevitable. As such, I listened intently to my body. One of the core tenets of minimalist running is the acutely increased amount of feedback you get from your body. Honestly, what could be better for a beginner? You are getting maximum feedback from the road/trail/track/treadmill. If something doesn’t feel right, I don’t know, MAYBE STOP DOING THAT THING. Through a long, careful ramp my body got stronger, and last year I ran a half-marathon in a pair of NB MT110, a shoe with a 4mm toe drop (almost flat) and minimal cushioning. (Side note: New Balance appears to be hard at work ruining the MT110.)

So how does one reconcile the supposed health benefits of minimalist shoes with the supposed uptick in running related injuries? I played in a band with a surgical podiatrist, Alan, about 18months ago and I asked what he thought. This is a guy, by the way, who said, “Born To Run and Crossfit are making me rich.” Regarding the scientific claims around biomechanics and evolution made in Born To Run, Alan did not dispute them. In fact, he agreed that a forefoot-midfoot strike and a shorter stride are very likely the way we evolved to run over the past 2 million years. The problem, he said, is that you and I have not evolved running around in our barefeet over the past however-old-we-are. Additionally, our ancestors didn’t evolve running around on pavement and sidewalks, nor did they sit in front of computers for ten hours a day. It’s all in how you approach training your own body, not unproven health claims made by a shoe manufacturer.

Which brings us back to the shoe manufacturer. Vibram was sued for making unsubstantiated claims about health benefits offered by their shoes, false advertising, essentially. It is worth noting that Vibram’s website has an entire section devoted to education about their product and barefoot/minimalist running. [I don't know if this section existed before the lawsuit.]

So here’s why everyone is wrong:

I mean. It’s a foot. How could you hate a foot?