Okay, a couple weeks shy of a full year later. Whatever. After their auspicious beginning, I felt compelled to swing by and provide an update on the state of the Merrell Barefoot Bare Access (MBBA) running shoes I bought in May, 2012. Go read the original review, so you know what the hell I’m talking about. I’ll wait.

I originally purchased the MBBAs as a step down from a pair of Nike Free Run+ (Version 1). Some of the reviews on Zappos seemed to indicate manufacturing defects that resulted in the sole and upper coming delaminated, which is a fancy sounding word that means “bro, your brand new shoes are falling apart already, bro.”

Zappos replaced the defective pair in typical Zappos turnaround time, and I set about running in the MBBAs regularly. In fact, these were my default running shoes from May to September. I ran my first Peachtree Road Race in them. In fact, they would have remained my default kicks well beyond, but I picked up a pair of New Balance MT10s for a trail run in September (partly because I wanted a trail shoe for a trail run, but mostly because I had been wanting to try the Minimus line for a while). I put in about 160 miles on the MBBA before mixing in the MT10s and then, later, a pair of New Balance 110s.

Despite the decrease in total mileage, the MBBAs have remained one of my favorite shoes for just kicking around. Merrell’s wide toe box allows me to wear normal socks with them, and the [relatively] understated design allows them to blend in with street clothes unlike a lot of running shoes that look like you’re wearing A GOD DAMN GUNDAM ROBOT ON EACH FOOT.

NOW THEN. How have the MBBAs held up over the last 12 months? 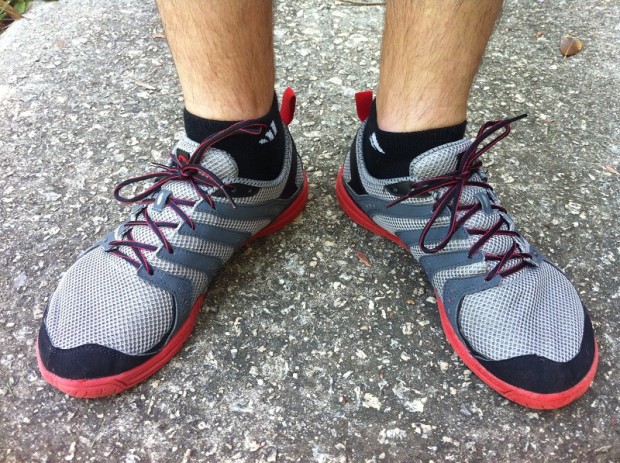 As you can see above, they still look almost brand new. Full Disclosure: I washed them with the laundry about 4 days before this picture was taken.

This is the replacement pair, the pair I was CERTAIN was going to fall apart immediately. As you can see, one year later, and no delamination: 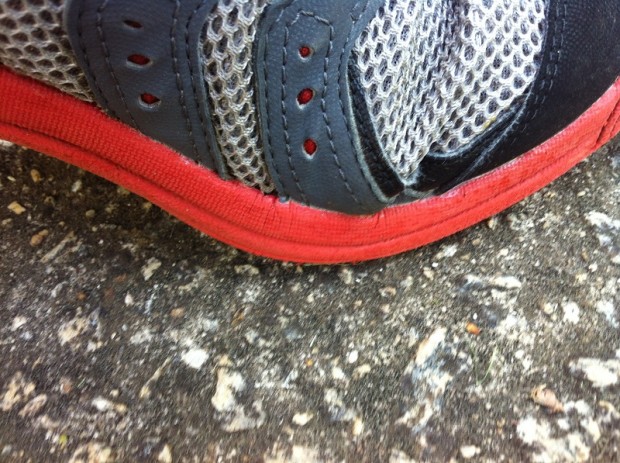 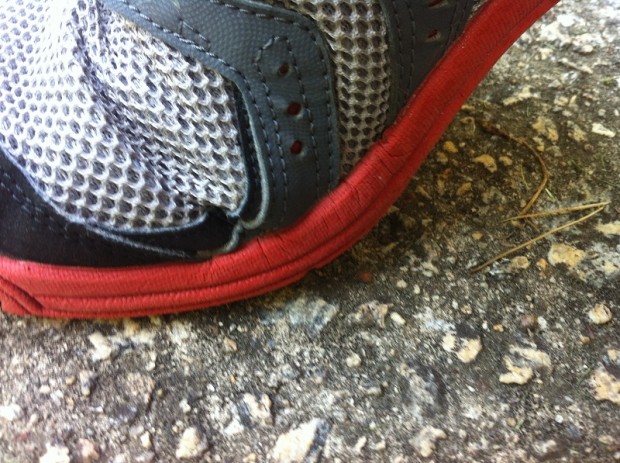 But, Tony, what about the squishy, grippy, foresole and midsole that began to disintegrate after a single 4-mile jog? Surely, your feet are now poking through the bottoms of both shoes like some sort of suburban Looney Toons hobo. With all your possessions tied into a bandanna on the end of a stick, both of which were purchased at REI. Right? 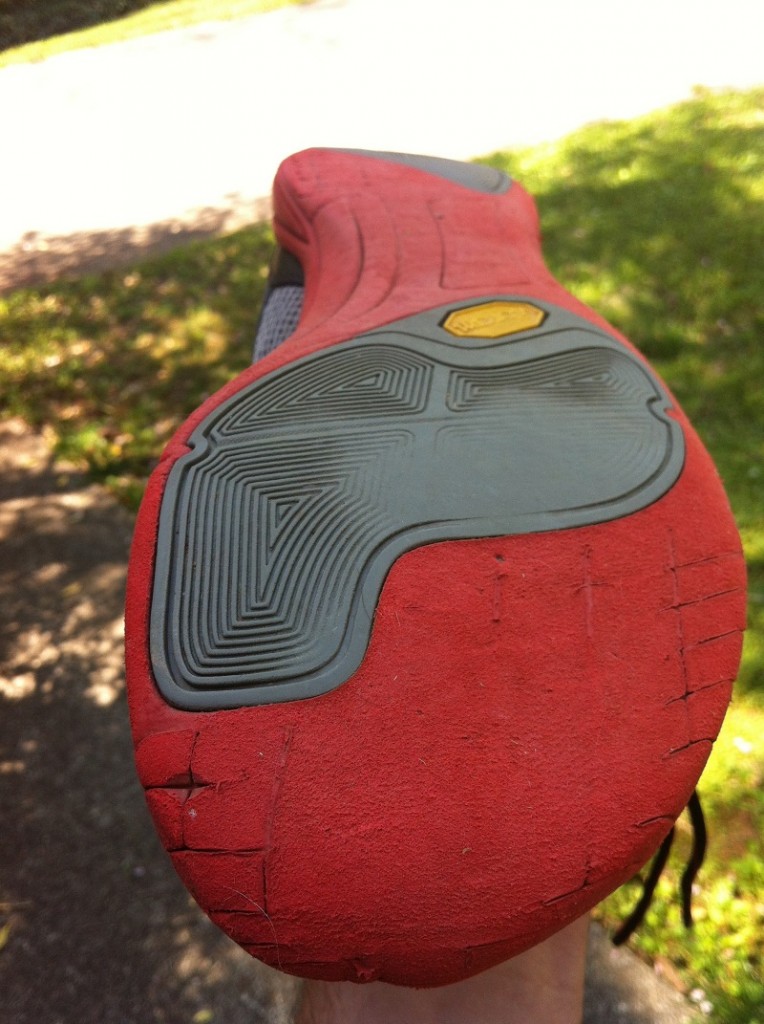 As you can see above, the foamy tread under the toes has worn completely smooth. It’s actually getting precariously thin on the right shoe, and I would not be surprosed if one of my tootsies poked through sooner rather than later. 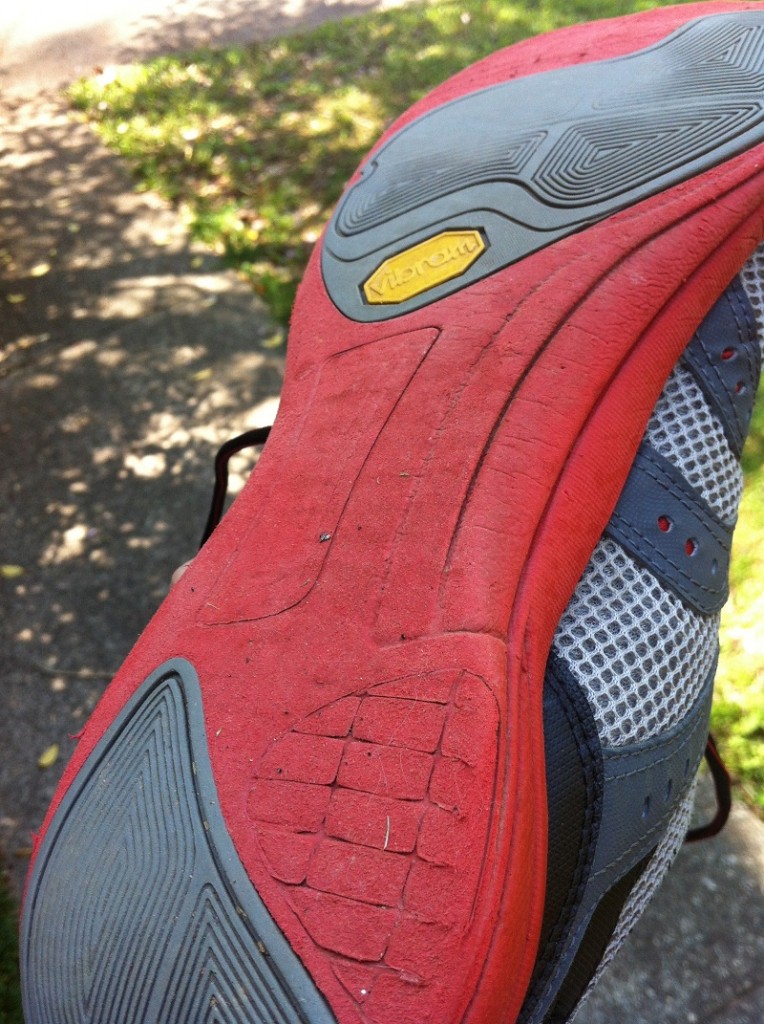 The midsole is holding up okay, I suppose. I’ve seen foamy substances like the this used on shoes before, but usually as a middle, cushioning layer, not taking the full brunt of every step. Wanna hear something gross? As you are probably aware, it is quite hot and humid in Georgia in the Summer. As you may or may not be aware, I am healthy slab of man and I sweat like Pee-Wee Herman’s sprinkler. A couple times last summer, following long(ish) runs (7+ miles), I noticed that I actually sweat through the bottom of these shoes. Like, that red part there? Soaked with sweat ON THE BOTTOM. Could the sweat have run around the sides onto the bottom from the outside? It’s possible. I choose to believe my feet forced sweat through the bottom of a shoe like Bruce Lee forcing, uh, something, uh, through some other thing.

Another look at the well-worn toe area: 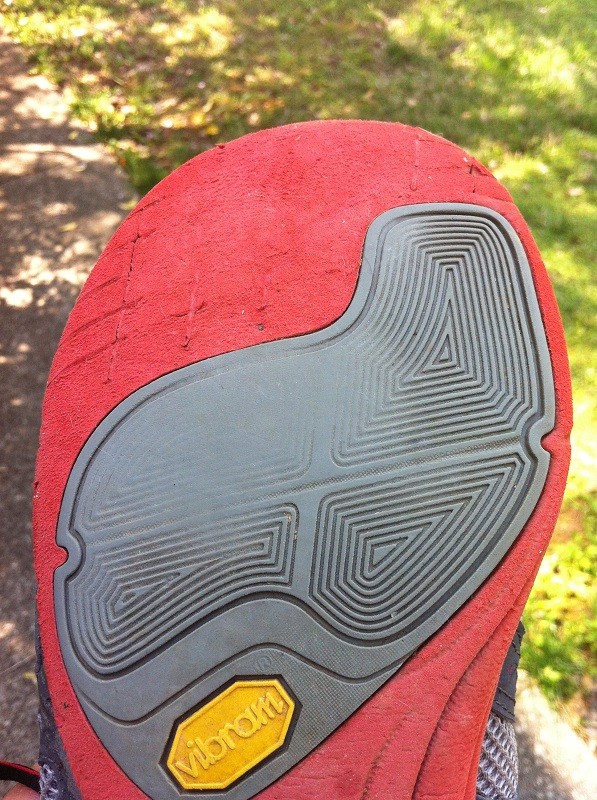 Following my initial impression, I was ready for the worst, so the fact that shoes have lasted this long is a pleasant surprise. That said, These shoes probably have 200 miles of total running in addition to a few months of casual wear. When you consider that my toes are about to see daylight, those numbers seem pretty light. Durability issues aside, these shoes did exactly what I wanted them to. They provided a zero-toe-drop platform with enough cushion for several medium to long runs. Both pairs of New Balances I have incorporated since have a 4MM toe drop.

Merrell recently released version 2 of the Bare Access. The pictures seem to indicate the bottom is completely covered in Vibram rubber, which I would think would help immensely with durability. Would I buy another pair of version 1? Probably not. Would I consider a pair of version 2? Absolutely.

Got some new kicks this week. I put about 250 miles into a pair of Nike Free Run+ (version 1). I wanted to get 300 miles out of them, but they started to wear a blister on my left foot after even moderate workouts. Which means get out of my life.

As you are all WELL AWARE, I got a pair of them freaky five-fingered deals a few months back. I really like them, but I also understand and respect the amount of damage you can do trying to transition too quickly from supple padding and support to what is essentially a thick coat of paint on the bottom of your foot. I love the Vibrams and I hope to someday run in them exclusively. As it stands, I still consider myself “in transition” to minimalist running. And I am okay with that. 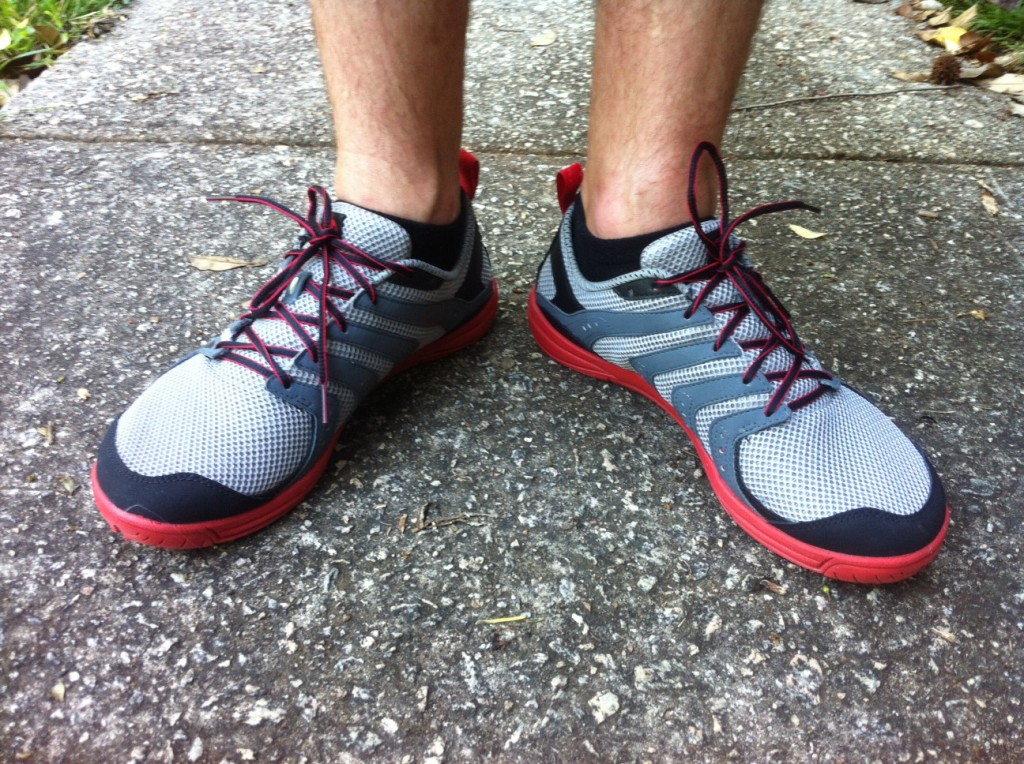 I first read about the Merrell Barefoot Bare Access (MBBA) shoes at Birthday Shoes. I was looking for the next logical step in my minimalist evolution, something between the Nikes and the toe shoes, and the MBBAs seemed to fit the bill perfectly. Zero toe drop, but an 8mm thick sole. So, on Tuesday afternoon, I ordered them from Zappos.

Zappos being Zappos, the shoes were in my hands fewer than 24 hours later. I walked around in them Wednesday evening for a bit, and they felt great.

THURSDAY MORNING. I dropped Marty off at school (iOS corrects ‘Matty’ to ‘Marty’ so Marty it is) and hit the hills of Smyrna for a jaunty prance in the shiny new kicks. I ran 4 miles and … honestly … felt fucking awesome pretty much the entire time [/FORESHADOWING].

There are currently 4 customer reviews on the Zappos page for the MBBA. Two of the four reviews mention an issue where the sole separates from the upper after minimal use. I noted this when I was shopping for the shoes but wrote it off and attributed it to poor suckers receiving manufacturer’s defects. [/FORESHADOWING]

Oh, Jesus Christ, here are the pictures (after a single 4 mile run). 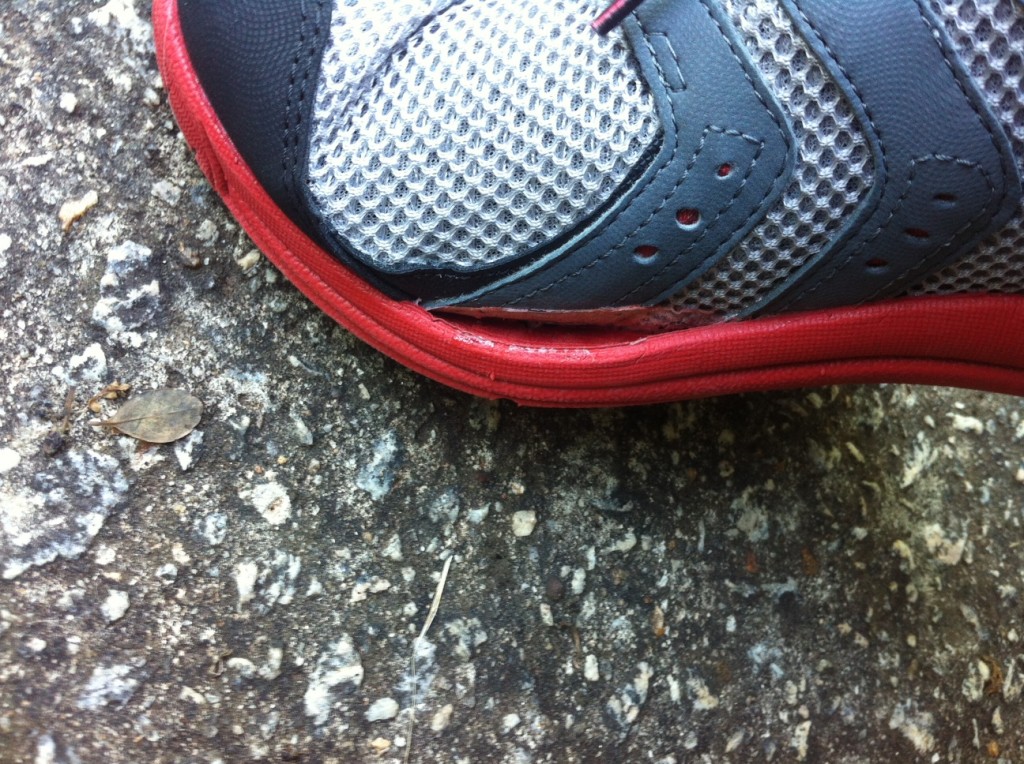 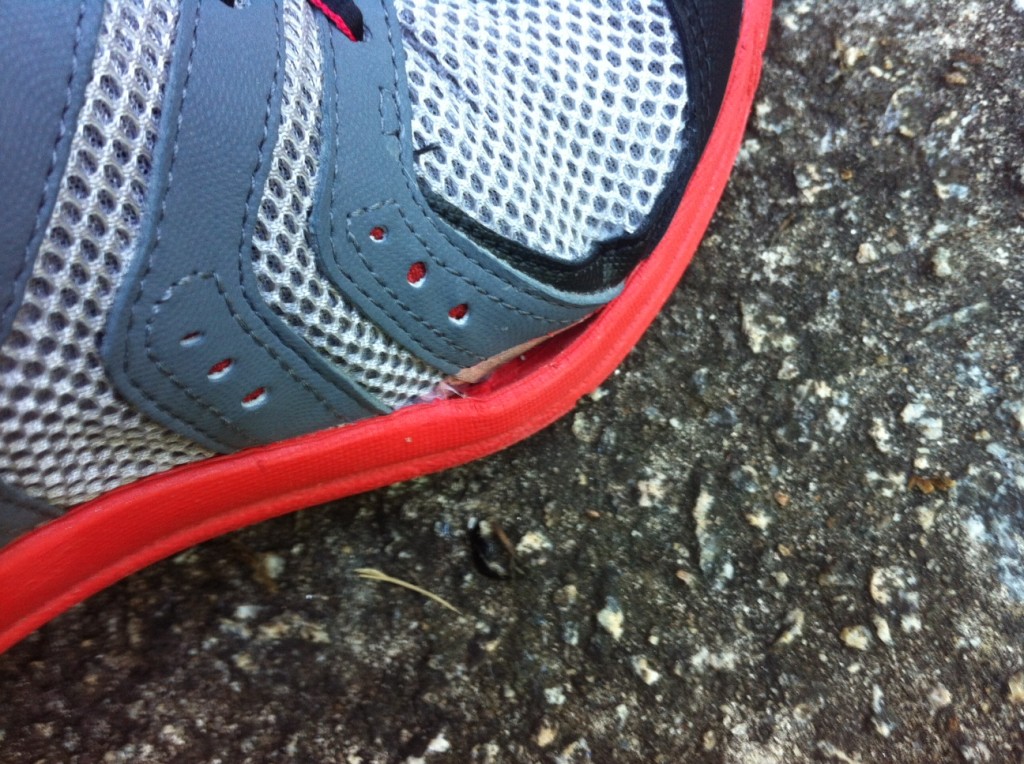 Additionally, and this is going to seem like I’m piling on Merrell here, look at the sole by the toes. Again, this is after one run. 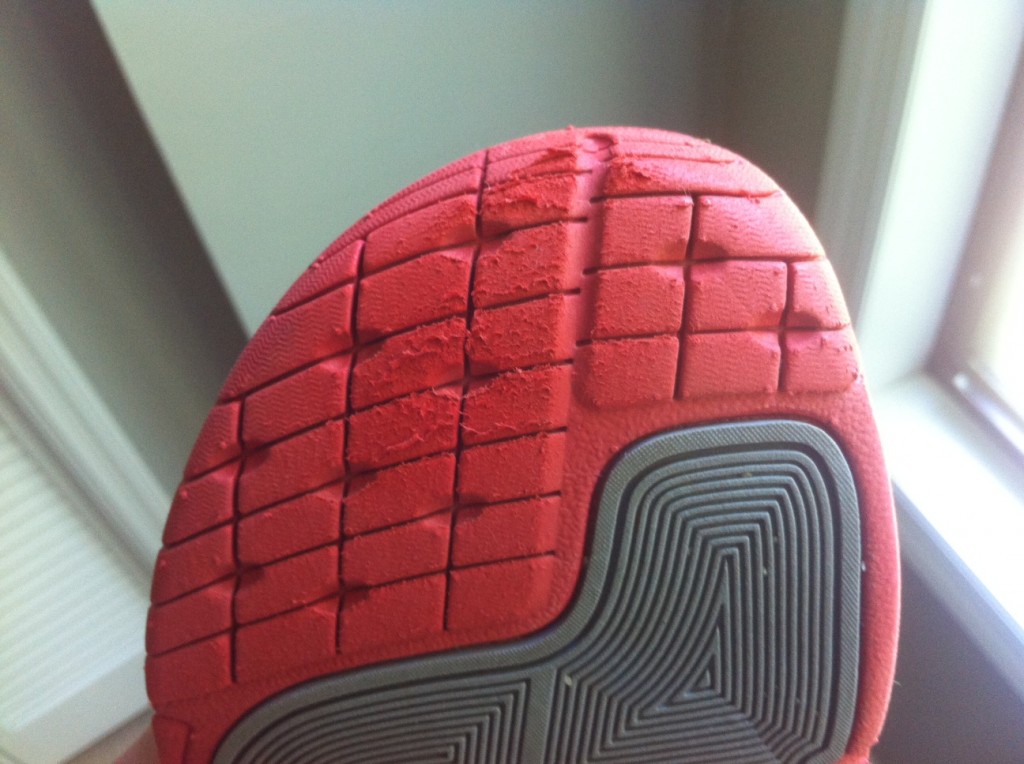 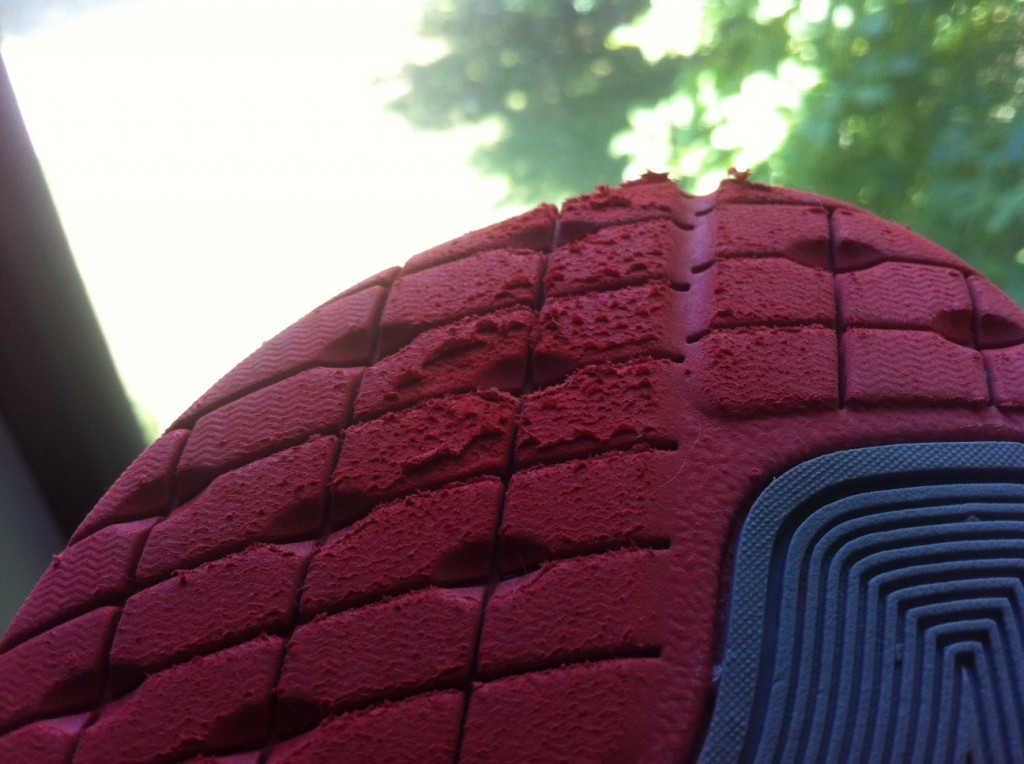 Oh, I’m sorry, I didn’t realize I was ordering racing tires for my Veyron that need to be replaced every 30 minutes.

This would be an open and shut case if the shoes didn’t fit or didn’t feel right whilst pounding le pavement. I would be like, “Remember that time I got that shitty pair of shoes from Merrell that felt terrible and fell apart after one run so I sent them back and never thought about them again? That was weird.” Alas, they felt GREAT on the one short run I enjoyed in them. My calves are burning today, likely a result of the zero toe drop, but it’s the good kind of burn that makes you want to get your ass back out there.

I called and emailed Zappos yesterday. Their Customer Service department was temporarily closed because they were “taking part in teambuilding and celebrating our culture.” It’s pretty awesome when a company can respond, “Can’t listen to you whine right now, getting drunk, kthxbai.” I’m being serious. Zappos is awesome.

UPDATE: Zappos responded to my email letting me know that a replacement pair of MBBA are already in the mail, which is awesome, but I still give the “Likely Result” above about a 75% chance of becoming reality.