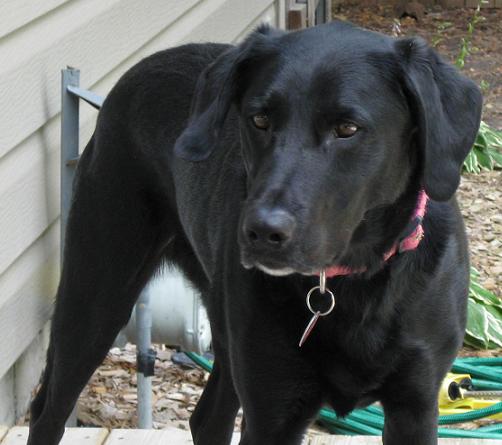 This is not the dog in question. I did a Google Image Search for: riley black lab.

I am here to recap a story from yesterday that involves an incident with a dog I encountered whilst running a couple miles from my house. But before I do, I should probably back up and establish some context.

I’ve been [pretending to be] a runner, on and off, for about a year and a half.

I had been pretending to be lifting weights for a few years, but I never found a program that really clicked. It should be noted that I didn’t try, at all, to find a “weight-lifting program” that “clicked” … whatever “clicked” means. I would still like to find said weightlifting program, because I enjoy lifting weights, but I digress.

I decided to give running an earnest try because … it’s totally natural. It’s free, it’s outdoors, and it’s beneficial to be good at it should you find yourself pursued by something that wants to kill the shit out of you. I was also intrigued by the recent surge in running devolution (I know there are virtually no correct uses of the word ‘devolution,’ but, I think it works here, so DEVOLUTION). The idea that people ran barefoot comfortably and effectively for 2 million years was an undeniable draw for me. If all the non-runners around me could do it, and without crazy-ass, moon-boot running shoes, I could do it too, right?

Understanding that I couldn’t simply walk out my front door and start chewing through the miles with no shoes on, I got a pair of ye olde Nike Free Run+ (which have since been replaced by the v2 model) and started slowly. On September 16, 2010 to be exact.

I did pretty well for the first couple months. I ran 4 times in the last two weeks of September, and then ran ten times in October. Near the end of October, though, my left knee started to feel a little loosey-goosey. I ended up psyching myself out, hard, and I didn’t run again until May. I ran a couple times in May, and a couple times in June, but didn’t really get back on the horse until mid-October, 2011. I wasn’t too stressed about physical activity in the Spring and Summer. Those keeping score know that I was spending nearly every weekend building a deck.

Side note: My ability to recall such specific dates is entirely a product of the Nike+ GPS app on my phone. Having raw data (speed, distance, route, etc.) available has made the difference for me. I look back at my previous attempts at running and laugh-wince, because I would leave my house, run way too fast until it sucked, and then stop, convinced that running just plain sucked.

ANYWAY, back on the horse in mid-October. I kept a solid 3-time-per-week routine through Thanksgiving peaking with a 5-mile prance on the Silver Comet averaging 8:55/mile the Saturday after Turkey Day. I fell off a bit in December, only managing 5 runs all month, and I have resolved to make a solid routine, er, a routine this year. Or something. The Nike+ app allows you to set a number of different goals. I have already done that.

WHICH BRINGS US TO YESTERDAY.

I left my house, set to do 5 miles around lovely Smyrna, GA. I was about 1.5 miles in when I noticed a black dog happily skipping along next to me. Usually when this happens, it’s because some shitty attack dog has decided to engage, so it is safe to say I was … alarmed. It quickly became evident this was not the case. This was a black lab, female, probably about 8 months old (40-50 lbs?), and her tag said her name was Riliy. R-I-L-I-Y. That is not a typo.

I coaxed Riliy out of the street and waited for her owners, who I was sure couldn’t be very far behind her. If she had gotten off of her leash, surely they would be jogging up any second, breathless and thankful. She could have escaped from her yard, so I also scanned for a slow-moving vehicle, maybe one with people leaning out of the windows yelling the name Riliy.

Still clutching Riliy by the collar, I called the number on her tag. Now, that sounds a hell of a lot simpler than it was. I, a complete stranger, am forcing a young, recently-liberated Labrador to do the one thing she does not want to do: sit still. Additionally, have you ever tried to use an iPhone (or any touchscreen device) while the screen is covered in sweat? You should try it sometime, while trying to keep control of a berzerk dog. I left a voicemail at the number (the girl on the voicemail sounded like a teenager, awesome), sent a text, and left another voicemail. Reality started to set in. What if I can’t get a hold of anyone? I was a mile and a half from my house with no leash and no car.

Riliy was wearing a second tag with a number to a vet, so I managed to hold her down and call it. They gave me a different phone number, but they wouldn’t give me an address, citing privacy laws. I called the second number and an older woman answered. She said it was her daughter’s dog and that she (the dog, heh) kept getting out. They lived right around the corner and said they would be right there.

Ten solid minutes passed, and nothing. I couldn’t release my grip on Riliy for fear that I would not be able to get her back. We were only a few hundred feet from 4-lane Atlanta Rd, which would be a doggy death trap. I called the number again, expecting no answer because they were on their way and THE WOMAN ANSWERED. I gave her my nicest WHAT THE FUCK YOUR DOG IS FREAKING OUT COME GET HER and hung up. 5 or 6 minutes later, the woman and her daughter came meandering around the corner with no apparent urgency in their gait. By the time they got to me, Riliy’s freakout had reached full Bullet Time. I helped the daughter, who was maybe 13 or 14, get the leash on.

They thanked me, but overall seemed very matter-of-fact about the whole thing, like, of course that is what anyone would do upon finding an apparently escaped dog, stop everything they’re doing and spend over a half hour wrestling with a strange animal while also trying to track down its owners. I have convinced myself I saved Riliy’s life, mostly because of her proximity to a very busy road, and partly to make myself feel better because the owners were such mouthbreathers. Unfortunately, Riliy will probably be back out on her own sooner rather than later. Next time, I’m going to let her run all the way home with me.