I stayed up late last night, and I’ve been feeling a little MEH all morning. I put some of this hot sauce on my lunch (leftover shrimp and grits courtesy of the Geester) and now I feel like I could kick a moose over a minivan. A full-sized, adult moose. Not the little mascot under my monitor. Don’t be ridiculous. 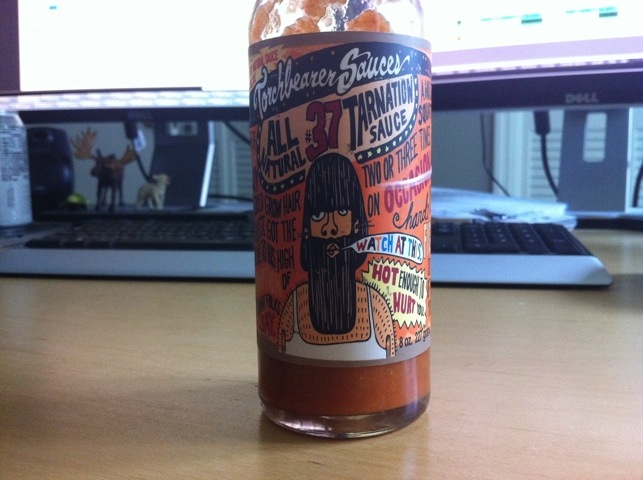 Post-publish edit: The WordPress iPhone app works pretty well. It allows you to assign categories and tags, add images, videos and other attachments, preview and save drafts, and schedule specific publish dates and times. It doesn’t have any built in text-formatting features, but you can always just add the html tags yourself. Same goes for adding links, etc. It also doesn’t support any of the post-editing features made available by this fancy-ass theme I’m using. So I had to come back to the desktop version and do quite a but of tweaking. Still, I approve. WILL EBAY AGAIN.

July, 2001 – Somewhere speeding through the scorching desert of Arizona, or New Mexico, or Southern Colorado, a young man grew restless. This restlessness had grown from the seeds of endless Peanut Butter and Jelly sandwiches with tortilla chips. The goal of saving time and money by eating sandwiches in the van instead of stopping for meals had long been accomplished. Something had to give. There had to be a better way. From this combination of swirling desperation and 115° heat, a new sandwich was born and has thrived ever since. Behold.

Step 1: Place two slices of Sprouted Grain bread on a plate. Place a jar of peanut butter and a bottle of hot sauce behind the plate. Take a picture. Critical comments posted by people who have never tried the above stroke of geniosity will be met with deserved ridicule and then forwarded to Brazilian death squads. Basically, eat peanut butter and hot sauce sandwiches or die like a dog in the street.

And now, a photo montage from Sunday morning called: OMG YOU WISH YOU MARRIED ME LOL!!1! Well … looky there. A blog update every day for a [work]week.

Yesterday, meg indicated that it was too soon to joke about that Yankee flying his go-kart into some rich people’s condos. Whether or not she was being serious I do not know (I doubt it). Regardless, I want to offer a digital olive branch from a while back:

END_OF_DOCUMENT_TOKEN_TO_BE_REPLACED

Yeah yeah yeah. Shut it. I would promise that my updates will be more frequent than once a month, but as soon as I do, two months will charge by and I will have broken a promise, so …

The Bulldogs of Georgia lost to the Volunteers of Tennessee on Saturday after they forgot that a game of NCAA Div 1-A men’s football does not in fact end after thirty minutes but rather lasts for a full sixty. I actually feel fine about the loss. Does it sting? Absolutely. But any Bulldog fan who tells you they didn’t see it coming is either lying, or they went to Georgia after 1999. I was there during the Goff / Donnan cluster, so this whole “beating Tennessee” thing is still an anomaly for me. If anyone is truly having a hard time with it, give me a call and I’ll remind you what it’s like to expect to lose to Tennessee and Florida every single year. Things are just fine.

If you’ve been by my flickr account in the past week or so, you’ve noticed that I went to some sort of Rock and/or Roll show. The weekend before last, Andy and I drove up to DC to see Nomeansno. DC is the closest to Atlanta they played this time around, and they’re geting to the age where every tour could be their last, so the trip was more than worth it. The set from the actual show is here. Below are some choice picks:

END_OF_DOCUMENT_TOKEN_TO_BE_REPLACED

… we pick up the story to find our hero mired in a weeks-long dearth of anything remotely resembling a cretive idea. To complicate things, he refuses to not blog. What results is an elementary recipe for utter disaster. Let’s see what he does next …

So, like, when all else fails, post an amusing photo to distract people, right? You betcha. If you haven’t already seen the Top 10 Most Ridiculous Black Metal Pics Of All Time (which, incidentally, were posted a looooong time ago) at Ruthless, then you’ve been lied to all this time about actually having access to the internet. Please stop polluting your pretend internet with lies.

What happens when someone on the Ruthless forum devises a way to add, via Photoshop, the black and white death-KISS makeup, specifically of Immortal’s own Reidar Horghagen, to a photo of yourself?

END_OF_DOCUMENT_TOKEN_TO_BE_REPLACED

Last night, construction of my mash tun began in earnest. For those of you who don’t know what a mash tun is, it’s a chamber in which you soak malted barley at a controlled temperature to convert the starches from the grains into fermentable sugars. The resulting sugar water (wort) is then boiled, hops are added, it’s all fermented with yeast, and eventually it makes you drunk in the face.

In July of this year, I reminded you all of my goal to be brewing all-grain by the end of the Summer. It’s almost mid-November, but the temperatures this week will be in the low-eighties, so I consider my goal to be met. After talking it over with the dudes at the homebrew shop, I’m going to do an Anchor Liberty clone this Saturday, followed by a stronger IPA in two weeks, racked directly onto the yeast cake from the Liberty. I posted a flickr set of the mash tun construction for those of you interested in more detail. I will update it after I slice up the manifold and add the sparge arm.

After a few emails back and forth with the curator of Whiskerino 2005, it has been decided that I will not participate this year. The curator was more than gracious in bending his rules and offering to allow me late entry, but I would have had to shave clean and start from scratch. While that is not an unreasonable request, I found myself suddenly attached to the beard I’ve been cultivating for the last 6 days. If I shaved now, I would wonder for the rest of my life, what greatness could have been. This 6 days of growth would haunt me. I thanked the curator for his offer to compromise and his willingness to accomodate, and politely declined. It was with a heavy heart I read the news this morning that registration for Whiskerino 2005 had been closed due to overwhelming demand. I only learned of The North American Free Beard Agreement this morning, and as quickly as my head filled with the trumpet fanfares of glorious beardliness, my dreams were brutally cast against the rocky shore of excessive bandwidth consumption and unwieldy project management.

Please, please, please, please allow me to join the Whiskerino contest. I last shaved on Wednesday, November 2nd, and I see no reason why I would not be able to explode across the February 28th finish line at full stride.

Rather than consume any more of your precious resources, I leave you simply with evidence supporting my case. The picture in the link below is of me amidst one of my frequent bouts of whimsy during the Spring of 2002.

UPDATE: Whiskerino 2005 found via the Scrivener who gave me plenty of advanced notice.